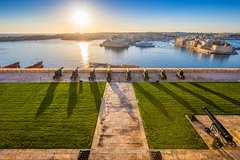 This guided walking tour of The Three Cities, is a grand experience in every way. Every path and street lead you to discover an eye-opening wonder, where history has been carefully restored to its original beauty.
Fortified by the Knights of St. John of Jerusalem & Rhodes in preparation of an impending Ottoman attach, The Three Cities is an impressive make up of architecture, winding streets, charm and very impressive super yachts. From Sieges to World Wars, (Birgu, Senglea & Bormla) have survived everything thrown at them. Learn why with our team of fantastic guides.

One of many forts - this is optional.

The gardens were designed by Grandmaster De La Sengle in 1551 with a beautiful guard tower built on the tip of the bastions. The guard tower, Il-gardjola, has several symbols carved, such as an eye, an ear and the crane bird, signifying guardianship and observance guarding the Maltese islands.

Fort St Angelo offers remarkable panoramic views of the Grand Harbour and its nearby fortified towns. Through traditional and innovative immersive displays, visitors can experience the colorful past and numerous architectural styles of this fort, together with stunning examples of artillery.

Being the only Inquisitors Palace which is currently open to the general public, this architectural gem presents an exclusive experience. Visitors can explore the remarkable renovations of the domestic kitchen area, the sophisticated setting of the piano nobile, the private quarters, the austere setting of the Holy Office Tribunal, the prison complex and the torture chamber.