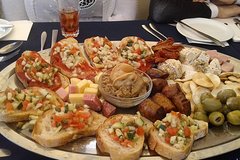 See the Malta the way it was meant to be seen with a personal driver for 8 whole hours which can guide you on the best route options to create your own sightseeing according to your own liking.

Included in the Tour is a Private Air-conditioned Brand new Minivan which will provide the transportation services for only 8 People (Maximum), personal driver plus suggested route/destinations.

In addition to the above, a bottled water and a traditional Maltese snack will be included, bought fresh from a local shop made from local produce as a morning snack.

A Maltese Platter will be served at lunchtime, the driver will set up a beautiful setting in a private farmhouse for you to drink free flowing local red/white wine while the platter is being prepared. The Maltese Platter will consist solely of Maltese Produce - This option is included at a cost of Eur 25/person (Lunch + Free flowing wine & water)

Travelers will be picked up and returned to their preferred destination at no extra charge.

The Upper Barrakka Gardens is one of the most popular spots in the capital city, from where you can get splendid views out over Grand Harbour. Its also a great place for a quick drink and a snack at the local kiosk, overlooking the gardens.

This location is also an entry point from the harbourside (and its cruise port near the Valletta Waterfront) down below, through the Upper Barrakka Lift which ascends the height of the bastion wall of over 58 metres.

Less popular and smaller than its Upper cousin, the Lower Barakka Gardens are a peaceful little haven to have a quick break and enjoy the views (and shade!) with a drink and a snack from the kiosk present near its entrance.

With a great vantage point over Grand Harbour, the Saluting Battery was built by the Knights in the 16th century and used by the British as an artillery battery until the 20th century. Recently restored, you can get a tour around the location and one of the guns located there is fired twice a day, at noon and at 4pm.

You can access the Saluting Battery by descending a few steps in the middle of the Upper Barrakka Gardens.

Formerly a state-of-the-art hospital, built by the Knights of Malta in the late 16th century, La Sacra Infermeria (nowadays Mediterranean Conference Centre) is one of the most impressive buildings in Valletta.

As part of a visit to The Malta Experience (audiovisual show), you get a guided tour of the building and its history with a highly knowledgeable guide. The tour is highly recommended, the show also worthwhile watching for a good primer on a high-level overview of Maltas history.

Special Offer - Book by January 31 to save 10% off our previously offered price! - Book Now!