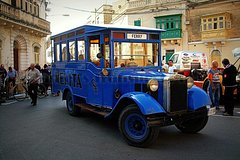 During this tour you will visit the 3 cities onboard an authentic vintage bus.

Step back through the mists of time as you drive to the fortress of Cottonera which is widely known as the Three Cities, these being Vittoriosa, Cospicua and Senglea. These cities were built and fortified by the Knights of Malta. You first start with an informative drive through Cospicua. Cospicua has been inhabited since Neolithic times. Prior to the 18th Century it was known as Bormla, a name which is still in use. Its fortification walls, constructed to protect the town and its neighbours Vittoriosa and Senglea, were built by the Knights of Malta. Construction began in 1638 but was not completed for another 70 years. In 1722, Grand Master Marc Antonio Zondadari declared Bormla a city and in view of its strong bastions named it Citta Cospicua.

You will then visit Vittoriosa, ideally situated for safe anchorage and over time it has developed a very long history with maritime, mercantile and military activities. Prior to the establishment of Valletta as a capital city of Malta, military powers that wanted to rule the Maltese islands would need to obtain control of Vittoriosa due to its significant position in the Grand Harbour. Vittoriosa is now a location of several tourist attractions. The historic Vittoriosa Waterfront contains the former Palace of the General of the Galleys and the Order of St. Johns treasury. The area was refurbished in the early 2000s and both buildings are used for other activities: the former is now a casino, while the latter is home to the Malta Maritime Museum. A second museum, the Vittoriosa 1565 Museum, is also located in the town and is dedicated to the siege and the battle in the town in 1565.

The third city is Senglea, joined by a land bridge to Cospicua during the time of the Knights of St. John and as a result it became a peninsular in shape. During the time of the Knights of St. John, Senglea was used as a hunting area and was known as LIsola di San Giuliano. In 1311 St. Julians church or chapel was founded. This was the first building to be constructed. On 8 May 1552 the foundation stone of Fort St. Michael was laid. Work on the fort, which was designed by Architect Pedro Pardo was completed in 1553. Construction of walled town Senglea took place during the following decade. The area, which had until the 1550s been known as Isola di San Giuliano or Isola di San Michele, was given city status by Grand Master Claude De La Sengle and was named after him.