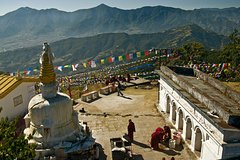 Jamacho Monasteryday hike on the Nagarjun Hill, known as Vindya Mountain, is a popular pilgrimage for Hindus as well as Buddhists. You will trek through the Nagarjan jungle, which is the national park attached to the capital city of Kathmandu. The trail brings you up tothe JamachoMonastry. This trek really gives you a sense of accomplishment after completion.

The beautiful Jamacho Monastery is situated on the Nagarjunhill top, where you will also find the tiny statue of Nagarjuna Buddha. The east side of the stupa has two rows of statues of Buddhist gods and goddesses. A divine view whether you believe in those gods or not. This trek provies magnificent views on the Kathmandu valley and with the distant views on Annapurnas, Manaslus and Langtangs mountain ranges.

You should bring enough water and snack with you so that you can stay there longer as it's your private day trip and come back to the hotel late in the afternoon.

Hike to Jamacho monastery is one of the most popular, short and easy hiking around Kathmandu Valley. The highest top of this hike is located at an altitude of 1900 meters. As it lies in Nagarjuna National Park, we have to walk around 3-4 hours to reach the top.

The hill of Nagarjuna also known as Vindya Mountain is the most popular pilgrimage sites for Hindus as well as Buddhist. On this day hiking to Jamacho, we will hike through Shivapuri Nagarjuna National Park and pay homage to Nagarjuna Buddha.

On the hilltop of Nagarjuna, one can find the small statue of Nagarjuna Buddha on the stunning Jamacho Monastery. As it is the hill of the Nagarjun National Park, one can overlook the different parts of the Kathmandu Valley and can capture breathtaking frames of Nepal.