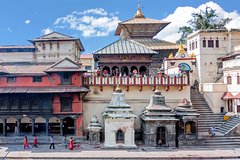 Live the high life on top of the world with this four day stay put in Kathmandu . Admire some of the most spiritual locations in the country and wander through historic royal districts.

TOUR HIGHLIGHTS:
Kathmandu: Visit the top cultural and historical attractions in the capital, including Durbar Square, the Pashupatinath Temple, the stupa of Boudhanath and the UNESCO World Heritage Site at Patan with sights such as the Krishna temple and the Rudra Varna Mahavihar Buddhist monaster

Pass By: Swayambhunath Temple, Swayamhu Circle Road, Kathmandu 44620 Nepal
After breakfast proceed for Half day sightseeing tour of Swayambhunath the most ancient and enigmatic of the Valleys holy shrines the golden-spired stupa of Swayambhunath tops a wooded hillock. Records of its history date as far as the 5th century, but its origins are believed to be older. It is the Kathmandu Valleys most sacred Buddhist shrine and whilst its worshippers include the Vajrayana Buddhists of northern Nepal and Tibet, Newari Buddhists are the most fervent devotees. and Kathmandu City: Kathmandu Durbar Square: Kathmandus number one tourist attraction swarms with life. Though a few of the squares 50-plus monuments date from the 12th century, most are from the time of the Malla Kings. Probably the most famous building here is the KumariBahal, a building richly decorated with beautiful woodcarvings, which is home to the Royal Kumari, the Living Goddess, a manifestation of the great goddess Durga. Nearby the former Royal Palace is a Mall Dynasty dwelling, once considerably more extensive than today. Within, the courtyard Nassal Chowk, originally hosted dramatic dance performances, now it is the coronation site of the Shah kings and contains some of the finest wood carvings you will see anywhere in the kingdom. End of these visit you can enjoy one of our optional tours as one-hour domestic return flight from Kathmandu to Mount Everest area for a birds-eye view sightseeing tour in window seat (flight normally lasts 40 to 50 minutes depending on weather conditions) or Visit to Patan Museum during the sightseeing tour of Patan Durbar Square.

Pass By: Pashupatinath Temple, Pashupati Nath Road, Kathmandu 44600 Nepal
Breakfast at the hotel is followed by a spiritual start to the day with a morning sightseeing tour taking in the Hindu Pashupatinath temple and Boudhanath, the largest Buddhist stupa in Nepal. Located on the banks of the holy River Bagmati, the vast Pashupatinath is dedicated to the Lord Shiva and is one of the most sacred Hindu shrines in the world. Thousands of pilgrims flock to this temple every year during Shivaratri, the birthday of the Lord Shiva. There are many eye-catching elements such as the large, gilded triple-roofed temple, accompanied by faithful pilgrims, that the hustle and bustle becomes an attraction in itself. Entrance to the main temple is limited to Hindus only. Behold the beautiful Buddhist Boudhanath stupa, which traces its origins to King Mana Dev in the fifth century. This UNESCO World Heritage Site is one of the worlds leading centres of Tibetan Buddhism and is bedecked with traditional prayer rolls and Tibetan prayer flags. Return to the hotel.

Pass By: Tribhuvan International Airport, Ring Rd, काठमाडौँ 44600, Nepal
After breakfast and indicated time departure transfer to the airport for your flight home or your next destination.