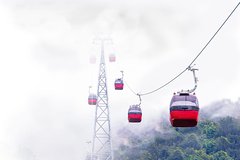 A newly established tourist hub located atop the highest hill of southern west Kathmandu, Chandragiri hill top showcases magnificent view of Himalayan range and Kathmandu valley. The bottom of hill which is 12 kilometres far from central Kathmandu has all different kinds of options to approach the hilltop  hiking, cycling and cable car. There is a famous Hindu Temple of lord Shiva which is major attraction for local tourist. There are restaurants, hotels and Children Park which makes this spot attraction for family tour in Kathmandu. After spending couple of hours around the view point, you will drive back towards Kathmandu and stop at Swyambhunath Stupa another gorgeous hilltop listed on world heritage site. Also known as Monkey Temple. Swhyambhunath is a monkey town where you see hundreds of monkeys wondering around the temples, streets, houses and all over the forest which covers this holy site.

Bhaleshwor Mahadev appeared at the spot where Satidevis Bhala or the forehead fell off from her dead body. It is believed that Satidevi, Shivas consort, gave up her life by jumping in a fire pyre at her father Daksha Prajapatis yagna (sacred fire ritual) after Daksha insulted her husband Shiva in front of scores of gods and goddesses invited at the religious ceremony. An enraged Shiva then carried her dead body on his back and walked across the world like a madman for long span of time, without taking note of Satidevis decaying body.

Swayambhu is an ancient religious architecture atop a hill in the Kathmandu Valley, west of Kathmandu city. The Tibetan name for the site means 'Sublime Trees' for the many varieties of trees found on the hill. For the Buddhist Newars, in whose mythological history and origin myth as well as day-to-day religious practice Swayambhunath occupies a central position, it is probably the most sacred among Buddhist pilgrimage sites.