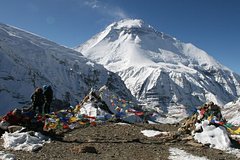 Mt. Dhaulagiri, the beautiful mountain that rises at 8167 metres is the sixth highest mountain of the world. The trek that initiates from a small and popular town that lies at the confluence of Myagdi River and Kali Gandaki gorge and takes you to some unspoiled and less travelled regions which has been able to retain its natural beauty and splendour intact. The lush landscape, hidden valleys, High Mountain passes along with many snow-capped peaks like Mt. Dhaulagiri, Mt. Manaslu, Mt. Annapurna and other 23 neighbouring peaks is a natural boon that makes Dhaulagiri trek a natural paradise.

Trekking in this region means an exploration of the wild. Recently reopened this thrilling region shows its long kept secrets, like the Gandaki Gorge, the deepest Gorge in the world !! Dhaulagiri means white mountain though many mountains over the world have names which translate to white mountain, this is without doubt the most astonishing one.

Kathmandu to Pokhara by Tourist bus is the best way transport to travel Pokhara by overland.

Pokhara, then drive down into the Kali Gandaki Valley and up the tributary Myagdi Khola valley as far as Darbang situted at an altitude of approximately 1100 meters. We set up the first camp of the trip at Darbang.

We set off trekking, passing through several villages route to the ridge-top settlement of Dharapani.

We set off trekking, passing through several villages route to the ridge-top settlement of Takam. We have lunch here, then continue our trek via Takam to Sibang (1770m).

Today, we trek to the large village of Muri where we stop for lunch , before continuing our ascent of the Myagdi Khola valley to Naura Bhir (1450m).

We trek northwards, still following the Myagdi Khola, to the village of Baghara. We descend to the river before climbing again to the herders camp at Lapche Kharka (2000m).

The trail continues climbing through forest to the open grazing area of Dobang. After lunch, continue to Sallaghari (2500m) where we make camp.

Today, we trek through a forested area and across moraine to reach the area known as the 'Italian Base camp' (3660m) where we make our camp below the stupendous west face of Dhaulagiri.

Continuing our ascent of the Myangdi Khola, we make the short but steep climb to our next camp known as 'Japanese Camp' or Chhonbardan Glacier Camp (4200m). There are great views of the Dhaulagiri peaks.

We are now around 4,000 meters and our next camp will be at 4700 meters so it is important that we include an acclimatization day prior to going higher. A good day for resting and catching up with the laundry.

Today, we trek across moraine of the Dhaulagiri West Icefall to reach Dhaulagiri Base camp (4748m) which we should reach in time for lunch. We set up camp here in a fantastic location completely surrounded by Himalayan peaks.

An early start, crossing moraine to eventually reach a ridge that takes us up to the easy-angled snow slopes leading to the French Pass (5360m). We cross the pass to reach the 'Hidden Valley' behind Dhaulagiri where we make camp at 5120 meters.

We climb back up to the level of the French Pass at the other end of the valley and then make the high traverse across to the slightly lower Dhampus Pass (5280m). Once over the pass, we descend steeply to our camp at Kalapani (4430m).