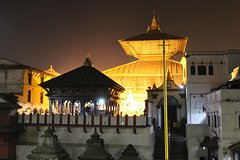 This package is a combo of cultural, historical and religious tour in Kathmandu gives you a scattered yet closer glimpse about Nepal. This heritage tour is one of kind excursion that takes you back into Nepal's rich architectural medieval era. Each of these sites that you will visit is different in terms of its architecture, craftsmanship, civilization, and various cultural facets and attributes. This heritage tour takes you to four iconic landmarks: Kathmandu Durbar Square, Pashupatinath, Bouddhanath and Swayambhunath temples. These amazingly interesting places are known for its historical, cultural and religious significance that symbolizes Nepal and its existence.

The Swayambhunath Temple known to the world as a monkey temple is significant to both the followers of Hindu and Buddhist religion. It has a lofty conical spire crafted out of copper and gold plated, with Lord Buddhas eyes adorned on all the four sides of the spire base. From its pinnacle one can get to see the 360 view of the entire Kathmandu valley which is a sensational breathtaking encounter.

Pashupatinath Temple is a symbolically, divine and one of the holiest Hindu temples dedicated to Lord Shiva in Kathmandu. It sits on the banks of the Baghmati River. People from all over the world gather her in numbers to pay their respect and get blessings for salvation. The temple courtyard contains various other small temples dedicated to various Hindu gods and goddesses. It is a sacred universe of religious beliefs that makes it a must see place once in a life time for ardent religious followers.

The Bouddhanath Stupa is one of the largest stupas in South Asia that is influenced by Tibetan Buddhism. It is a whitewashed dome painted with the all-seeing eyes of the Buddha. This is highly symbolic structure that reminds people about Buddhas path towards enlightenment. This holy courtyard contains fifty other Tibetan monasteries. One can catch glimpses of distinct art and architecture of ancient Nepal and Tibet which is inspiring and memorable.