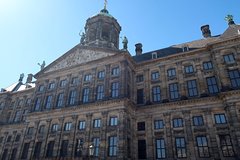 During the Amsterdam History Tour you will discover some of Amsterdams most iconic squares, buildings, canals and old streets, while learning about the citys history, liberal culture and Dutch people.

Our knowledgeable local guides will take you on a great walking tour straight through Amsterdams historic center. During this 1:45 hour tour our licensed experts explain how freedom and tolerance were born in the Netherlands and how they impacted Amsterdams financial development; turning a scanty fishing village into the centre of world trade.

We describe how these same values from the 16th century still shape the attitudes of todays Amsterdammers. This Amsterdam City Tour is a feast for the eyes; so dont forget to charge your camera!

At Dam Square, Amsterdam's main square, we'll give you a short overview of all the things we'll discuss during the tour and an introduction on Dutch culture.

At the Old Church we'll discuss how the buildings rich history and how its story is intertwined with the establishment of the Dutch identity.

At Damrak we'll explain how and which trade turned Amsterdam from a small fishing town into the financial center of the world. We'll point out how the remnants of this period are still visible in the buildings around you.

At Beursplein we'll discus how and why the Dutch invented the modern corporation and world's first stock exchange.

At Dam Square we'll also talk about the New Church and the special role it plays for the Dutch Royal Family.

At this stop we'll discuss how and why the Amsterdam canal ring was constructed. We'll also talk about Multatuli, one of Holland's most influential writers and how he had an impact on Dutch culture and world history.

At the gay monument we'll discuss the Dutch views this subject.

Stop At: Statue of Anne Frank, Prinsengracht 281, Amsterdam The Netherlands

At the Anne Frank statue we'll talk about the Jewish persecution in The Netherlands during world war two, and especially about the Frank family.

During the tour we'll pass by the Anne Frank House. No entry, but with the option to take pictures.

In front a the Bulldog Rock Shop, part of Amsterdam's most famous coffeeshop chain, we'll talk about cannabis legalisation and decriminalisation in the context of Dutch history and culture.

The last stop of the tour is at Amsterdam's second Red Light District, a lesser known area. Here we'll discuss Amsterdam's tolerance of prostitution throughout the centuries and why a majority of the Dutch hold these views.