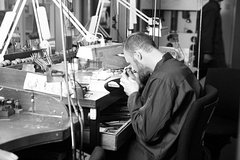 Marvel at the beautiful monuments of Amsterdam's old Jewish neighbourhood. Get access to all the sights of the Jewish Cultural Quarter with its exhibitions and discover the various stages of diamond polishing during a guided tour at Gassan Diamonds.

Any trip to Amsterdam should include a visit to the Jewish Historical Museum. This museum, housed in four monumental synagogues, offers a unique look at Jewish life in the Netherlands past and present in all its complexity. The museum has a large multimedia collection ranging from paintings to films and from everyday objects to 3D presentations and always offers one or two temporary exhibitions.

In the centre of the Jewish Cultural Quarter stands the magnificent Portuguese Synagogue. The building is still used as a house of worship, but it is also open to the public, and concerts are held there regularly. The 17th-century interior is still fully intact and illuminated by hundreds of candles. The other buildings in the complex include treasure chambers where visitors can admire a unique collection of ceremonial objects made of silver, gold, silk and brocade.

During the Second World War, the occupying forces made Jews assemble in this former theatre. Tens of thousands of people were held here, not knowing what fate awaited them, until they were deported to concentration and extermination camps. The Hollandsche Schouwburg is now a memorial site with a wall of names commemorating the Jewish victims. It also holds an exhibition about the Holocaust in the Netherlands.

Inside the Jewish Historical Museum is another museum, just for children! It is set up as a Jewish family home with six rooms, where children aged 6 to 12 can play games that will teach them about Jewish culture  sometimes seriously and sometimes with humour. Children can bake rolls in the kosher kitchen, learn Hebrew in the study or make music together in the music room.

Through this former teacher training school hundreds of Jewish children, who were held captive in the crèche next door, were smuggled to relatively safe places with the help of the resistance during the Second World War. At this historic site, in the National Holocaust Museum, the story of the Holocaust is told in changing exhibitions and events in an artistic form and based on personal accounts.

Gassan Diamonds, a family-owned company, is located in a formerly steam-driven diamond factory in the center of Amsterdam. Every year more than 400,000 tourists visit the historical diamond factory. During a guided tour, multilingual staff will explain the various stages of diamond polishing. Observe skilled craftsmen at work as they transform the most precious crystal known to man into dazzling ready-to-wear brilliants. After the tour, browse through the extensive jewelry and watch collection in the boutique.

By presenting your Jewish Cultural Quarter combi ticket, you will be served a glass of Champagne during the tour and afterwards, receive a brilliant gift.