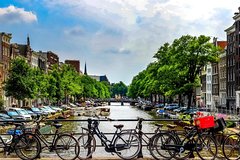 Escape the crowd! Whether its just you and your significant other, or an extended group of friends, our private tour is specifically designed so that you will get to know Amsterdam intimately. Not only is there plenty of time for all your questions, but all so a chance to get all your travel tips and recommendations from the guide.

Get well acquainted with Amsterdams cobblestoned streets on our 6-hour tour, walking over the many beautiful bridges overlooking the iconic canals on Canal Belt. You will be guided along the waterways, seeing the recognizable tall and slim buildings and the many houseboats.
On a private tour your guide will be happy to tailor your experience on the day based on what you want to do and see. Youll get personalized recommendations for where to eat and explore for the rest of your stay and of course, the chance to ask all the questions you want!
To choose a Nova Fairy Tales experience is to discover Amsterdam, not just visit it!

The Anne Frank House is a writer's house and biographical museum dedicated to Jewish wartime diarist Anne Frank. The building is located on a canal called the Prinsengracht, close to the Westerkerk, in central Amsterdam in the Netherlands.

Stop At: The Jordaan, Amsterdam The Netherlands

The narrow canals and streets of trendy Jordaan are flanked by indie boutiques, cozy pubs and hip eateries. Stalls at the Noordermarkt square market offer jewelry, clothes, antiques and organic food. Antiques Centre Amsterdam sells vintage ceramics and paintings, while smaller galleries in the area focus on innovative contemporary art. Other attractions include the Houseboat Museum and the Amsterdam Cheese Museum.

The Royal Palace of Amsterdam in Amsterdam is one of three palaces in the Netherlands which are at the disposal of the monarch by Act of Parliament. It is situated on the west side of Dam Square in the centre of Amsterdam, opposite the War Memorial and next to the Nieuwe Kerk.

The Nieuwe Kerk is a 15th-century church in Amsterdam located on Dam Square, next to the Royal Palace. Formerly a Dutch Reformed Church parish, it now belongs to the Protestant Church in the Netherlands.

Dam Square is the town square in Amsterdam. Its notable buildings and frequent events make it one of the most well-known and important locations in the city and the country.

The Westerkerk is a Reformed church within Dutch Protestant church in central Amsterdam, Netherlands. It lies in the most western part of the Grachtengordel neighborhood, next to the Jordaan, between the Prinsengracht and Keizersgracht.

The Begijnhof is one of the oldest hofjes in Amsterdam, Netherlands. A group of historic buildings, mostly private dwellings, centre on it. As the name suggests, it was originally a Béguinage. Today it is also the site of two churches, the Catholic Houten Huys and the English Reformed Church.

The Albert Cuyp Market is a street market in Amsterdam. The market is the busiest in all of the Netherlands and is reputedly the largest daytime market in Europe.

Stop At: I Amsterdam, Hobbemastraat, 19, 1071 XZ Amsterdam The Netherlands

I Amsterdam letters. This city slogan has been adopted by visitors and tourists alike, and the large-scale letters outside the Rijksmuseum are an immensely popular photo hotspot.

Vondelpark is the largest city park in Amsterdam, and certainly the most famous park in the Netherlands.

Stop At: Singel, Amsterdam The Netherlands

The Singel is a canal in Amsterdam which encircled the city in the Middle Ages.