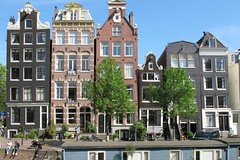 If you are in Amsterdam for the first time, after this tour you will feel already at home in my beautiful city. I wil tell you about the rich history, starting from the founding of the city till the present day.

Pass By: Zeedijk, Oudezijds Kolk to Nieuwmarkt, Amsterdam The Netherlands

Walk along the oldest part of the city

Experience the silence of a medieval courtyard in the city center

We will walk along the beautiful 17th century canals

We will not visit the museum itself, but stop opposite. I will tell you about the Frank family and talk about what happened during this black period in Amsterdam, the Netherlands and Europe.

Visit a unique courtyard in the Jordaan district

Pass By: The Jordaan, Amsterdam The Netherlands

Walk through the old workmen neighborhood

Special Offer - Book by January 31 to save 25% off our previously offered price! - Book Now!