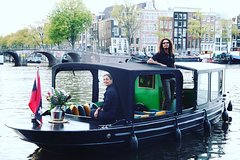 Get a ticket on a 90 minute cruise, sailing through the most beautiful canals of Amsterdam with Brian & Mathilda. You'll also see the smaller cozy canals the big tourist boats can't go too. See the old thirteenth century town, the famous Golden Age Canalbelt district, the loved Jordaan district, the skinny bridge and the 7 bridges canal! All of that on the cutest and cozy boat called "Zavi" Heated and covered on rainy days or with an open sun deck on sunny days. The "Zavi" has a toilet and a bar as well and fits a max of 12 passengers.

Looking forward having you on board!

You can also rent the Zavi private. First hour € 170

Pass By: The Amstel, Amsterdam The Netherlands

We will pass by the Hermitage

Pass By: Museum of the Canals, Herengracht 386, 1016 CJ Amsterdam The Netherlands

We will pass by the ninestreets of Amsterdam

We will see the National Opera & Ballet

We'll see a glimpse of this building as well

Pass By: Waterlooplein Market, behind the Amsterdam Townhall, Amsterdam The Netherlands

We'll also pass through one of the oldest Jewish markets. Nowadays a vintage flea market

The tower of coins where money was made!

Pass By: The Smallest House in Amsterdam, Oude Hoogstraat 22, 1012 CE Amsterdam The Netherlands