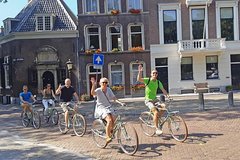 Utrecht is a lively city with many attractions. A world can also be discovered just outside the city. Easy to reach by bicycle and also sustainable. On quiet roads and paths, we cross the beautiful countryside with its impressive farms and country houses. Hidden deep in the greenery are several impressive forts of the New Dutch Waterline, which have been nominated as a UNESCO World Heritage Site for good reason.

Stop At: Fort Vechten, Marsdijk 2 diagnolly across from Achterdijk 21, 3981 HE Bunnik The Netherlands

Free walking tour on the grounds of Fort Vechten

Pass By: Wilhelminapark, Utrecht The Netherlands

Tour through the park.

A view of the Rietveld Schroder House.