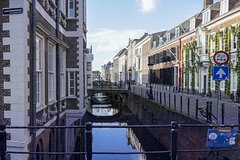 Utrecht is one of the oldest cities in the Netherlands, having started out in the 1st century as a Roman frontier fort. It has always been important and has the scars and the achievements to prove it.

Join me on a wander along canals and down laneways that have witnessed the passing of Knights, Emperors and Beguines. We will explore the less familiar northern quarters of the old city, to castles; a wartime bunker; poetry on high, lofty mansions and little cottages.

Utrecht is located in the centre of the country and is easy to get to from anywhere. You will come to understand the vitality of today's Utrecht more clearly through the layers of its near and distant past. There are also plenty of places to stop on the way to pull up a chair, order a coffee and watch the world walk, drift, or cycle by.

The tour starts outside the east entrance to Hoog Catharijne.

Nothing beats a Dutch city centre market. Whos up for croquettes, pickled herring, fresh bread or more cheese varieties than you ever knew existed?

A small but impressive museum that presents the life and times of those who lived in the working-class neighbourhoods of Utrecht in the tough times of the 1920s.

Utrecht has always had a pivotal role in the religious life of the Netherlands. The Jacobikerk is an important Protestant church that starts our walk through a neighbourhood filled with stories of faith and commitment.

Oudaen is a city castle and one of the most significant buildings in Utrecht. It was built around 1276, so has been around for a while. Its a great place to stop for refreshment, especially to check out the craft brewery in the cellars.

The most beautiful post office in the whole of the Netherlands is on Neude square.

This is the largest and oldest fabric market in the Netherlands, and has been going for around 400 years.

The tour passes by this boutique hotel that was home to an eye hospital in the past.

The tour passes through the old University neighbourhood of Utrecht.

The powerful sculpture of a remarkable young woman who continues to have meaning in our lives long after her passing.

The tour ends near Janskerk with a story about the Order of the Knights of Utrecht.