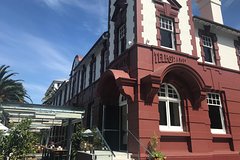 Departs 3:00pm. A tour of Tauranga city taking in the sights of early european settlements, the battle of Gate Pa, views of the harbour, local history and how Tauranga grew to be the city it is today. Finishes with a complimentary glass of wine or beer at The Clarence boutique hotel. - RUNS OCTOBER TO APRIL ONLY

This tour will take you through some of the local history regarding how Tauranga grew to become the city it is today. Starting off on The Strand you will hear about Tauranga harbour and how it exisited before european arrival. Moving up to The Elms mission station you will see some of the oldest european settlement buildings in New Zealand and get an understanding of how Europeans became established in the Bay of Plenty and started to trade with the local tribes.
At Monmouth Redoubt you see will evidence of the British armies occupation of the area and start to learn about the New Zealand Wars and the significance of the battle of Gate Pa. Moving on to the battle of Gate pa sight you learn about the battle, how it unfolded, what happened later at the battle of Te Ranga and the laying down of arms that followed.
We then travel across to Matua to the reminants of the Otumoetai Pa site where there are beautiful views across the harbour from what was considered by the first Europeans to arrive here as the capital of Tauranga. You will learn more about the Musket Wars, how peace was brought to the area after much conflict and how the Tauranga has since developed to become the busiest port in the country.
Lastly we head back to the city to The Clarence Hotel to the site of the first government buildings in Tauranga and learn how the site was used by the local mission, the british army and the local government. Finishing with a glass of wine or tap beer to enjoy the atmosphere of Tauranga's greatest boutique Hotel.