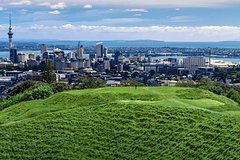 Enjoy a convenient half-day (3.5 hours) private tour for your group of up to 9 people. This tour is designed for travellers with just a short time in the City. "See twice as much in half the time" as your local kiwi guide shows you what makes the City of Sails so special. Enjoy panoramic views, see volcanoes and learn about Maori culture. Gain local knowledge on the best shopping, cuisine and hangouts while covering the best sights with plenty of stops for photos.

We can tailor the 3.5 hours to suit your personal preferences, likes and dislikes. We can also pick up and drop you off when it suits you, and where it suits you.

Encounter Aucklands maritime history at the Viaduct Harbour and visit Kura Gallery which showcases artworks unique to Aotearoa while representing both established and emerging Maori and New Zealand artists.

Onto Wynyard Quarter, then Westhaven Marina  the biggest marina in the southern hemisphere and the spectacular views from the Auckland Harbour Bridge.

Continue on through the very groovy suburb of Ponsonby and along the infamous K Road (Karangahape Road) and up to the dormant Mount Eden Volcano summit for dramatic 360 degree panoramic views of the city skyline and coastline.

Visit the Auckland Domain and the impressive Auckland War Museum and experience the exquisite Wintergardens. Stop off at the Wintergarden cafe to sample some of Auckland's world-class coffee

Drive through the historic colonial Parnell Village another upmarket suburb famous for its boutique shops and cafes.

Experience the stunningly scenic waterfront route of Tamaki Drive through to the popular seaside suburb of Mission Bay, an area dominated by large native Pohutukawa trees.

After stopping at Mission Bay, feel free to take a short walk along the beach, taking in the views of the sea, looking back at the beautiful Auckland skyline and Rangitoto Island.

Then onto Bastion Point, (at the west end of Mission Bay), which symbolizes Maori Land Issues and offers a fantastic view over the entrance to the Waitemata Harbour.

Here also lays a clifftop mausoleum with a memorial garden and reflecting pool. Michael Savage's body is interred in a vertical shaft below the sarcophagus. Michael Savage was considered one of New Zealand's greatest Prime Ministers, often called "Everybody's Uncle".