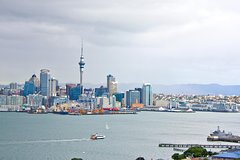 This tour combines the very best of Auckland city in the morning, with the best of Auckland nature in the afternoon. The Auckland City tour is an easy morning introduction to the diverse city of Auckland. The tour has plenty of photo opportunities and includes views from Mount Victoria in Devonport, which are not to be missed!
The afternoon nature tour is a great introduction to New Zealand's nature and visits some of the stunning rainforest scenery, as well as the glorious Piha Beach. Easy walking tracks and dramatic coastlines are only a short drive from Auckland's city centre. Our experienced guides and small group size means you will be well looked after. In the afternoon we also include a New Zealand style afternoon tea including biscuits/cookies and tea, coffee or juice.

Travel up Queen Street - the main street of the city centre, home to iconic buildings and a mixture of shopping and CBD offices

Travel through the suburb of Ponsonby, with stunning heritage homes

Enjoy views of Auckland city and the Hauraki Gulf

Visit a white sand beach on Auckland's North Shore - a stark contrast to the black sand you will see later in the day. (Generally there is time here to purchase morning tea or a coffee if you wish - at own cost)

Westhaven Marina in Auckland, New Zealand, is the largest yacht marina in the Southern Hemisphere.The marina has nearly two thousand berths and swing moorings, and tends to be continually booked. Auckland, known as 'City of Sails', is generally known for its maritime passions

Travel through Parnell Village, a quaint little suburb on the city fringe

Take a walk through the rainforest. Hear the bird song while our guides tell you of the flora and fauna

Enjoy a stroll along the black sand of Piha beach