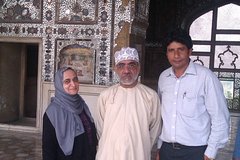 We are showing near about most famous all historical monuments of Lahore in a short period of time in low prices with a well educated guides to whom you can ask all questions related to history and culture of Pakistan. So, you will really enjoy your trip with us , we receive our clients as our guests and send them back as our fast friends. We shall also try our best to meet the people in old towns to know about their culture.

The Lahore Museum 10th largest museum in the world was founded in 1865 during the British colonial period. The museum is now also renowned for its extensive collection of Buddhist art from the ancient Indo Greek and Gandhara kingdoms.

The Zamzama Gun located directly in front of the Lahore Museum, were made famous in the celebrated British novel Kim, written by Rudyard Kipling--whose father was one of the museum's earliest curators.

Minar-e-Pakistan is a national monument located in Lahore. The Tower was built between 1960 and 1968 on the site where the All-India Muslim League passed the Lahore Resolution on 23rd March 1940.

It is a master piece of the Mughals, it was built during the period of the 6th Mughal king Aurangzeb Alamgir in 1673/74. It is made with the red sandstone. It is very beautiful Mosque.

The grave of National poet of Pakistan, who gave the idea to the Muslims of the subcontinent to make a separate homeland. He was born on 9th November in 1877 in Sialkot and dead on 21st April in 1938 and is buried very near to the stairs of Badshahi Mosque Lahore.