Journey through the Indus Valley -Mohenjo-Daro 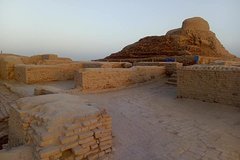 Journey through the Indus Valley -Mohenjo-Daro

Mohenjo-daro‎, meaning 'Mound of the Dead Men is an archaeological site in the province of Sindh, Pakistan. Built around 2500 BCE, it was one of the largest settlements of the ancient Indus Valley Civilization, and one of the world's earliest major cities, contemporaneous with the civilizations of ancient Egypt, Mesopotamia, Minoan Crete,and Norte Chico.
Mohenjo-daro was abandoned in the 19th century BCE as the Indus Valley Civilization declined, and the site was not rediscovered until the 1920s. Significant excavation has since been conducted at the site of the city, which was designated a UNESCO World Heritage Site in 1980.

Some of the major structures of Mohenjo-daro are described below;
1 The Buddhist Stupa.
2 The Great Hall (Granary)
3 The Great Bath
4 Assembly Hall
5 College of Priests
6 Mohenjo-daro Archaeology Museum
Its a 12 hour drive from Karachi,Nearest Airport is Sukker about two hours drive from Mohenjo-Daro

A guided tour to Mohenjo-daro full day means traveler gets to see
The Buddhist Stupa visible from a great distance,is the highest and most prominent structure in Mohenjo-daro,the Great Hall,The Great Bath,Assembly Hall,College of Priests.Mohenjo-daro Archaeology Museum