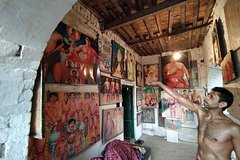 Most of our time would be spend around The Walled City of Lahore also known as Old City, forms the historic core of Lahore .Lahore is sometimes referred as the cultural capital or the heart of Pakistan, the city was a seat of the Mughal Empire and the Sikh Empire as well as the capital of Punjab in Mahmud Ghaznavi's 11th century empire and in the British Empire.The culture of Lahore is a manifestation of the lifestyle, festivals, literature, music, language, politics, cuisine and socio-economic conditions of the people.

Royal Trail (Shahi Guzargah) is a heritage trail that leads from Delhi Gate to the Lahore Fort. ... The Royal Trail connects many of the heritage monuments like Shahi Hamam Turkish Bath), Wazir Khan Mosque, Sonehri (Golden) Mosque and tomb of Malik Ayaz, a Mughal governor of Lahore.

The Shahi Hammam, also known as the Wazir Khan Hammam, is a Persian-style bath which was built in Lahore, Pakistan, in 1635 C.E. during the reign of Emperor Shah Jahan. It was built by chief physician to the Mughal Court, Ilam-ud-din Ansari, who was widely known as Wazir Khan

Located in Lahores inner city, the Wazir Khan Mosque is on the tentative list as a UNESCO World Heritage site and is one of the most spectacular sights in Pakistans cultural capital.The glorious Wazir Khan Mosque stands near the Delhi gate

The Sunheri Mosque, also known as the Talai Mosque, is a late Mughal architecture-era mosque in the Walled City of Lahore,

Lahore Fort or Shahi Qila as it is also known as stands in the historic city of Lahore, Pakistan. Originally built sometime in the 11th century, it is known for being almost entirely rebuilt in the 17th century.

The Shalimar Gardens (or the Shalamar Gardens), a Persian type garden complex built by the Mughal emperor Shah Jahan in 1641 AD, is situated in Lahore, Pakistan. It is one of the most significant among other Mughal Gardens. Its construction was supervised by Khalilullah Khan, who was a noble in Shah Jahan's court

The Hazuri Bagh Baradari is a baradari of white marble located in the Hazuri Bagh of Lahore, Pakistan. It was built by Maharaja Ranjit Singh, the Sikh ruler of Punjab

Stop At: Wagah Border, 30 mins outside of Lahore, Lahore Pakistan

Everyday of the year, just before sunset, a flag lowering ceremony takes place at the Wagah Border between India and Pakistan. The Wagah Border ceremony,The ceremony has been going on since 1959 and lasts for around 45 minutes. It starts with high patriotic spirits from sides of the border. Soldiers march towards the gate at the border, which is thrown open when they reach there. The soldiers salute each other other and start lowering the flags.