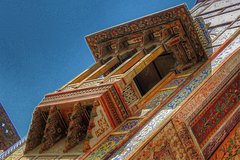 Hamdan Touristik Services is proud to conduct tours to Lahore as we have professional and qualified guides and latest transport services. We own our tourists and put in all our efforts to satisfy our clients. Lahore is rich in history and culture and we show all the hidden treasure of Lahore. Client's safety is our priority and Govt. of Pakistan is also offering protection to the tourists visiting Pakistan. All our tours are flexible for the ease of tourist.

The Badshahi Mosque was commissioned by Emperor Aurangzeb in 1671, with construction of the mosque lasting for two years until 1673. The mosque is an important example of Mughal architecture, with an exterior that is decorated with carved red sandstone with marble inlay. It remains the largest and most recent of the grand imperial mosques of the Mughal-era, and is the second-largest mosque in Pakistan. After the fall of the Mughal Empire, the mosque was used as a garrison by the Sikh Empire and the British Empire, and is now one of Pakistan's most iconic sights.

Tourist will be shown museum which is full of history of Prophet Muhammad (P B U H) and His companions.

The Lahore Fort or Royal Fort, is located at the northern end of walled city Lahore, and spreads over an area greater than 20 hectares. It contains notable monuments, some of which date to the era of Emperor Akbar. The fort was inscribed as a UNESCO World Heritage Site for its "outstanding repertoire" of Mughal monuments dating from the era when the empire was at its artistic and aesthetic zenith. Our guide will show and tell all about history to the tourist.

The Shahi Hammam also known as the Wazir Khan Hammam, is a Persian-style bath which was built in Lahore, in 1635 C.E. during the reign of Emperor Shah Jahan.

Considered to be the most ornately decorated Mughal-era mosque, Wazir Khan Mosque is renowned for its intricate faience tile work known as kashi-kari, as well as its interior surfaces that are almost entirely embellished with elaborate Mughal-era frescoes. The mosque has been under extensive restoration since 2009 under the direction of the Aga Khan Trust for Culture and the Government of Punjab, with contributions from the governments of Germany, Norway, and the United States.