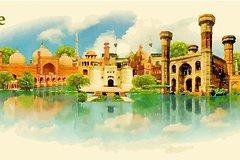 Minar-e-Pakistan is a national monument located in Lahore, Pakistan. The tower was built between 1960 and 1968 on the site. Surrounding area is covered by park, where everyday thousands and locals visit the sight.

The Lahore Fort is a citadel in the city of Lahore, Punjab, Pakistan. The fortress is located at the northern end of walled city Lahore, and spreads over an area greater than 20 hectares.

The Lahore Museum, is a museum located in Lahore, Pakistan. Founded in 1865 at a smaller location and opened in 1894 at its current location on 'The Mall' in Lahore during the British colonial period, Lahore Museum is now one of Pakistans most visited and highly regarded museums

Gawalmandi Food Street Lahore is one of the oldest and most famous food streets in the world. We do lunch at Food Street which is included in trip cost.