Pakistan Guided Tours offers all kind of tours , Let us Explore with us. 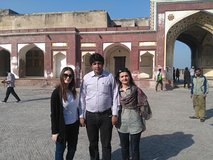 Pakistan Guided Tours offers all kind of tours , Let us Explore with us.

As you know Roman say all roads lead to Rome and similarly , Pakistani people say one who has not seen Lahore has yet not born. The Mughals , Sikhs and the British ruled here.Lahore is a historical, cultural and a capital city of Punjab. We can frankly say Lahore is a city of Gardens due to the Mughals and City of colleges due to the British because they built here many colleges and we all know education plays an important role in the progress and development of the nation. It is a city of mud wrestlers. you can see the hustle and bustle of the old life. According to Hindu legend the son of Rama, Lava is the founder of this city on his name the name of the city is and his temple is still present in Lahore. After visiting every person has to say from the core of his or her heart that Lahore is Lahore. The food of Lahore is also famous. Here are many shrines of Sufi saints who played an important role in preaching of Islam specially Hazrat Data Ganj Baksh Ali Hajveri. LAHORE IS LAHORE

Stop At: Hazuri Bagh, Walled City, Between Lahore Fort and Badshahi Mosque, Lahore Pakistan
We shall visit here Hazuri Garden which was laid out by Maha Raja Ranjeet Singh a Sikh ruler in 1818 A.D. who ruled here 40 years from 1799 to 1839 A.D. We shall also see Light Gate including 12th gate of Old Lahore city.
Duration: 10 minutes

Stop At: Badshahi Mosque, Lahore Pakistan
We shall visit here Badshahi Mosque which was built by 6th Mughal king Aurangzeb Alamgir in 1673/74 A.D. This beautiful mosque which is mostly built with red sand stone is a masterpiece of the great Mughals.
Duration: 30 minutes

Stop At: Tomb of Muhammad Iqbal, Iqbal Park, Lahore Pakistan
It is a tomb of Dr. Allama Muhammad Iqbal who was national poet of Pakistan. He was born on 9th November 1877 in Sialkot and dead on 21st April in 1938 A.D. According to his desire and will he was buried very near to the stairs of Badshahi Mosque.
Duration: 10 minutes

Stop At: Lahore Museum, Lower Mall Road, Lahore Pakistan
Lahore Museum is the 10th largest Museum in the world, It is the best collection of Gandhara, Jainism, Hinduism, Buddhism, Sikhism and Islam etc. Here you can see the unique and priceless statue of Fasting Buddha, Old carpets, doors , dresses, shoes, windows during the Mughal era. We shall visit Pakistan Freedom movement.
Duration: 2 hours

Stop At: Liberty Market, Noor Jehan Road Gulberg, Lahore Pakistan
It is the most famous shopping market of Lahore very near to MM Alam Road. Here you can see all brand of shopping dresses and shoes etc.
Duration: 1 hour

Stop At: Shahi Hammam, Akbari Mandi Walled City, Lahore 54000 Pakistan
It was built during the period of Mughal king Shah Jahan in 1634 A.D. It is very near to Dehli gate, which faces to words Dehli in India. In olden times here was hot bath, cold bath and even steam bath.
Duration: 20 minutes

Stop At: Masjid Wazir Khan (Wazir Khan Mosque), Delhi Gate Old City, Lahore Pakistan
This beautiful mosque was built in 1634 A.D during the period of Mughal king Shah Jahan. There is a lot of fresco and tile mosaic work, It is itself the school of design and arts.
Duration: 30 minutes

Stop At: Shalimar Bagh (Shalimar Gardens), Lahore Pakistan
It is a very beautiful garden in Lahore, It was also laid out during the period of Shah Jahan. It has three terraces and more than 400 water fountains and a beautiful water fall etc.
Duration: 40 minutes

Stop At: Wagah Border, 30 mins outside of Lahore, Lahore Pakistan
We shall also visit the flag ceremony in between Pakistan Rangers and Indian BSF at Wahga border. It is a very unique ceremony in the world.
Duration: 2 hours