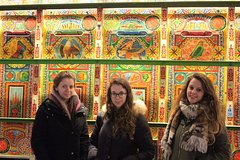 Peshawar is the capital of the Pakistani province of Khyber Pakhtunkhwa. Peshawar's recorded history dates back to at least 539 BCE, it was the center of the ancient Gandhara region, Peshawar served as the capital of the Kushan Empire,The city was an important trading centre during the Mughal era before serving as the winter capital of the Afghan Durrani Empire from 1757 until the city was captured by the Sikh Empire in 1818, who were then followed by the British in 1849., We try to touch base peshawar in a day visiting old neigbourhood with its beautifully carved wooden balconies to Sethi Mohalla preserved by the govt, to Qissa Khawani Bazaar( Story Teller Bazaar) , visiting Mughal era Mahabat Khan Mosque to Peshawar Museum
There are other things to which can be customized for example Khyber pass ( approval is required ) , Bala Hisar Fort ( approval required ), Jamrud Fort etc

Sethi Mohallah, sometimes called Sethian Mohallah, is an old and traditionally arranged neighbourhood in the old city of Peshawar, Pakistan. The mohallah contains seven South Asian mansions built by the Sethi family that were built in a style reminiscent of Central Asia with elaborate wooden carvings

The Heritage Trail and Food Street Peshawar,starting from Ghanta Ghar to Gor Gathri, a total length of 500 meters;