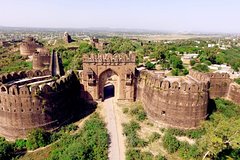 Rohtas Fort (Punjabi, Urdu: قلعہ روہتاس‎; Qila Rohtas) is a 16th-century fortress located near the city of Jhelum in the Pakistani province of Punjab.The fortress was built during the reign of Sher Shah Suri between 1541 and 1548. The fort was also designed to suppress the local Gakhar tribes of the Potohar region. The Gakhar tribes were allies of the Mughal Empire, and refused to recognize the suzerainty of Sher Shah Suri.] The fort is one of the largest and most formidable in the subcontinent. Rohtas Fort was never stormed by force, and has survived remarkably intact.

The fort is known for its large defensive walls, and several monumental gateways. Rohtas Fort was inscribed by UNESCO as a World Heritage Site in 1997 for being an "exceptional example of the Muslim military architecture of Central and South Asia. The fort lies eight kilometers south of the Grand Trunk Road. It is approximately 16 km NW of Jhelum, and is near the city of Dina. The historic Shahrah-e-Azam road once passed adjacent to the outer northern wall of the fort.