The historical City of Lahore 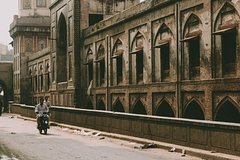 The historical City of Lahore

Lahore, the ancient Mughal City of Gardens located in Punjab, is regarded as the cultural capital of Pakistan. Dating back 2,000 years, its history is a rich blend of Jain, Hindu, Buddhist, Greek, Muslim, Mughal, Afghan, Sikh and British influences. In Lahores heart beats the Walled City, a relic of the Mughal era with the majestic Lahore Fort (a UNESCO World Heritage site), the Badshahi Mosque and the Wazir Khan Mosque testaments to the citys distinctive architecture. The bejewelled city of the nawabs also boasts being the food capital of Pakistan; dont miss a chance to pay a visit and take in its authentic desi flavour. As the famous Punjabi saying goes:

Explore the mosque and surrounding attractions. Lunch at the famous Haveli restaurant with the sight of the Badshahi mosque.

Explore the massive Lahore Fort and the Shahi Qila

Stop At: Wagah Border, 30 mins outside of Lahore, Lahore Pakistan

Enjoy the majestic parade at the Pakistan-India border. Look at the tense flag hoisting parade between The giant Pakistani soldiers and The Indian soldiers