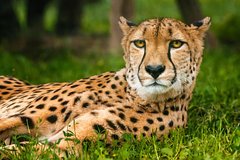 The De Wildt Cheetah Centre was established by Ann Van Dyk and brother Godfrey in 1971 with the aim of breeding endangered species. Since that time the Centres efforts have resulted in the major achievement of breeding what was once a threatened species, the cheetah (Acinonyx jubatus). Over the years, over 750 cheetah cubs have been born at De Wildt  a dramatic contrast to the days when the cheetah population of South Africa was estimated at a mere 700.

Nestled in the foothills of the Magaliesberg in North West Province, the Centre is situated about one hour from Johannesburg and forty-five minutes from Pretoria. It is close to the Hartbeespoort Dam, a popular destination for day excursions from Pretoria and Johannesburg. This is an exceptionally interesting tour, providing the visitor with a unique opportunity to learn more about South Africas fascinating wildlife  and the efforts to preserve it for future generations.

The Ann Van Dyk Cheetah Centre is a cheetah breeding complex and park located just to the east of the Hartbeespoort Dam and only 30 km from Pretoria. The breeding centre was started as a conservation project for the threatened Cheetah in 1971. It was the first of its kind in South Africa  in fact in the world, and it has been a great success. While the cheetah project was the base from which the Centre launched its conservation ethic, it soon widened to include other rare and endangered animals such as the wild dog, brown hyaena, serval, suni antelope, blue and red duiker, bontebok, riverine rabbit and vultures  including the very rare Egyptian vulture.