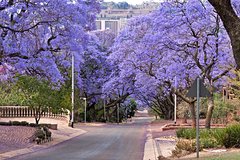 Every so often Pretoria or Tshwane is regarded as Jacaranda City and justifies the name in late spring when the Jacaranda trees blossom into a flood of purple. Its the administrative capital city of South Africa and immersed in the ancient history of South Africa. All these sightings make the city a prefect starting point for adventurous holidaymakers.

Voortrekker Monument structure is a 360 degree photos of the 40 meter high structure surrounded by ox-wagons. Depending on who you are, the monument that has some of the finest sculpture work in the country is either a reminder of apartheid or an important memorial for Afrikanerdom.

Church square is the historic centre of Pretoria! The square was surrounded with various church buildings that stood from 1856 to 1905. Several historical and architectural significant buildings surround the square: The Palace Of Justice (Rivonia Trial) the Old Capitol Theatre, the Tudor Chambers,the Old Chambers and the General Post Office.

The Union Buildings are considered South Africa's architectural masterpiece that was completed in 1913, the Union Buildings housed the administrative offices of the Union of South Africa. Today it is still the official seat of government and houses the offices of the President of South Africa. Within the gardens youll find various monuments to important historic South African figures, including a monument of General Louis Botha riding his horse and an imposing 9m-tall bronze statue of Nelson Mandela that was unveiled in 2013.

Freedom Park stands as a memorial to what South Africa has achieved as a nation. More importantly, it stands as a beacon to guide all South Africans on the route of hope and patriotism to a proudly united nation.

The Pretoria City Hall is the largest public hall in South Africa, was built to celebrate the city-status of Pretoria which was obtained in 1931.