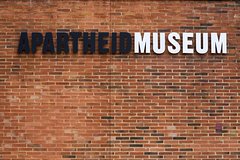 This is an exciting and informative tour of the vibrant sites and sounds of Soweto. Take in the political and historical importance of the struggle against apartheids structures, the suburbs of Soweto, informal settlements, Apartheid Museum and other memorial sites. Visits to Vilakazi Street  home to two Nobel Peace Laureates.

Illustration of the era of segregation and oppression in South Africa

Visit the inside of Mandela's house that the late statesman lived in before his lengthy imprisonment.

The illustration of SOWETO youth uprising that today is a symbol of resistance to the brutality of the apartheid government.