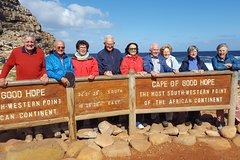 Experience the best of Cape Town and the Stellenbosch Wine Region in Three Days. Any of these days can be changed to suit your personal requirements. This is a private tour and the best way to experience Cape Town in three days. We visit the top attractions such as Table Mountain, Bo-Kaap and Robben Island on Day one. Day two will include visits and wine tastings at our favourite and most beautiful wine estates in Stellenbosch and Franschhoek. We tour the Cape Peninsula on day three. That will include an optional boat trip to Seal Island from Hout Bay, Chapman's Peak Drive, Cape Point Light House, Penguins at Boulders and more. We are the owners of Wild Almond Tours and qualified South African Toursit Guides. We will share our knowledge of South Africa and the places we visit with you in an interesting and fun way. We make holidays memorable. Hope to see you soon.
Angelo Melonas & Chris Coetzee

Stop At: Table Mountain National Park 8001 South Africa
We start our day by visiting Table Mountain via the Table Mountain Aerial Cableway. Table Mountain is one of the most recognizable mountains in the world and was recently voted one of the New Seven Wonders of Nature. The crown jewel in the Cape Floral Region and home to an incredible diversity of endemic species. We will do a very easy 45 minute hike on the mountain while we enjoy the views of the peninsula and the splendor of nature. Fantastic opportunities to take memorable photographs.
Duration: 2 hours

Stop At: Signal Hill, Cape Town Central 8001 South Africa
We drive via Lion's Head to Signal Hill and enjoy the vistas of Table Bay, the City and the Atlantic seabord. Lion's Head is situated between Table Mountain and Signal Hill. Lion's Head peaks at 669 metres above sea level. The peak forms part of a dramatic backdrop to the city of Cape Town and is part of the Table Mountain National Park.Signal Hill or Lion's Rump, is a landmark flat-topped hill next to Lion's Head and Table Mountain.Make use of the oppotunity to take a beautiful photo of Table Mountain from Signal Hill. Signal Hill is known for the Noon Gun. The gun was fired for the first time in 1806. It was used as a signal (hence Signal Hill) to ships in Table Bay. These are the oldest guns in daily use in the world. The noon gun has been one constant in Cape Towns colourful and ever-changing history, with the tradition surviving colonial occupations, wars, and apartheid. Signal Hill is also one of the launch sites for paragliding in Cape town. When conditions allow, there are few things as memorable as soaring over the city, drifting on the thermal air currents and admiring the spectacular sea and mountain views, before landing in Sea Point or Camps Bay.Watch the paragliders launch if the conditions permit or if you are brave enough you can do an optional tandem flight with one of the many professional pilots.
Duration: 30 minutes

Stop At: Bo-Kaap, Bo-Kaap, Western Cape
We visit the historic Bo Kaap also known as the Malay Quarter where freed slaves settled after the abolishment of slavery in 1834. These brightly painted houses are one of the most photographed areas in Cape Town. In the 1700s, political exiles, slaves and convicts were sent to the Cape by the Dutch from India, Sri Lanka, Malaysia and the Indonesian Archipelago. Although not technically correct, these individuals and their descendants became known as Cape Malays. Many of them eventually settled in the Bo Kaap.
The Bo-Kaap is a unique part of old Cape Town. It is situated above the central business district of the city. It is a small residential area, less than two kilometres in length and less than half a kilometre at its widest point.
Most of the Bo-Kaap was built between 1760 and 1840. It is comprised of four areas: the Malay Quarter, Stadzicht, Schotsche Kloof and Schoone Kloof. The precise boundaries of each area are unclear.
Duration: 30 minutes

Stop At: Robben Island Museum, Cape Town Central 7400 South Africa
We stop for lunch at the V&A Waterfront where you will be spoiled for choice by the many restaurants to choose from. After lunch the ferry to Robben Island will depart at 13h00.
Robben Island is situated 6.9 kilometres west of the coast of Bloubergstrand. The name is Dutch for "seal island." The island is roughly oval in shape, 3.3 km in length, and 1.9 km wide, a total area of 5.08 km².
During apartheid many Black people were kept on Robben Island as political prisoners including former President Nelson Mandela. The prison internationally notorious for its harsh conditions and when the political prisoners of the apartheid government were released it became a symbol of the strength of the human spirit.
Robben Island was declared a World Heritage Site because the buildings on the island are a reminder of its sad history and because the same buildings also show the power of the human spirit, freedom and the victory of democracy over oppression.The visit to Robben Island will take four hours.
Duration: 4 hours

Stop At: Babylonstoren, R45 Road between Paarl and Franscchoek between Paarl and Franschhoek, Paarl 7670 South Africa
We start our Stellenbosch Wine Tour with a visit to the beautiful gardens of Babylonstoren, one of the oldest Cape Dutch farms. It has a fruit and vegetable garden, unique accommodation, fine food and wine, and a sense of wellbeing. After a very interesting walk through the garden we will do our first wine tasting of the day.
Wines are produced in a state-of-the-art winery and are made to showcase the soils and climate where the grapes are grown. The Tasting Room is adjacent to the Wine Cellar, offering views of the conical Babylonstoren hill, Simonsberg and the Banghoek Mountains.
Their wines are a combination of the very essence of Babylonstoren  keeping things simple and as true to the earth as possible.
Sample a flight of six wines such as Viognier, Chenin Blanc, Mourvedre Rose, Chardonnay and Nebukadnesar.
Duration: 2 hours

Stop At: La Motte Wine Estate, R45 Main Street, Franschhoek 7690 South Africa
Situated in the beautiful Franschhoek Valley in South Africas Cape winelands, La Motte is home to the finest wines, recognised internationally for exceptional quality. With its picturesque setting, traditional cuisine and historic charm, La Motte is an enchanting choice for those who appreciate the finer things in life.
A wide variety of La Mottes award-winning wines can be sampled and purchased in a stylish and relaxing atmosphere. Seated at hand-made tasting tables, a welcoming tasting counter or on comfortable sofas, visitors have an unimpeded view of the working and maturation cellars through large glass panels. Tastings are enjoyed amidst original works of art by acclaimed South African artist Jacob Hendrik Pierneef, after whom La Mottes Pierneef Collection of premium wines is named.
Duration: 1 hour

Stop At: Delaire Graff Estate, Helshoogte Rd, Stellenbosch, South Africa
After lunch and a drive through the beautiful town of Franschhoek we travel via the Helshoogte Pass towards Stellenbosch. On our way we will visit Delaire Graff, known as the Jewel of the Cape Winelands for our last wine tasting of the day.
Delaire Graff wines rank among the most prestigious in the Southern Hemisphere. Their unique terroir, on the crest of the panoramic Helshoogte Mountain Pass, is something their ambitious winemaker explores harvest after harvest. A long, slow ripening season ensures world-class clarets and red wines big in structure with soft tannins and elegance.
Duration: 1 hour

Stop At: Hout Bay, Hout Bay, Western Cape
We drive via Camps Bay to the Hout Bay harbor from where a Forty Five - minute optional boat tri[p to Seal Island can be done.
Duration: 1 hour

Stop At: Chapman's Peak Drive, Hout Bay Road Between Noordhoek and Hout Bay, 7872 South Africa
Chapman's Peak was named after the Captain's mate of an English ship, the Consent in the year 1607. In the early 1920s Sir Nicolas Fredrick de Waal, first administrator of the Cape Province, ordered the construction of a high-level road linking Cape Town with the Southern Suburbs. Known as Chapman's Peak Drive and claimed by many as one of the most scenic drives in the world. We will stop at the look-out point for a spectacular photo opportunity.
Duration: 30 minutes

Pass By: Noordhoek Beach, Beach Rd, Noordhoek 7979 South Africa
We drive past Long Beach, in Noordhoek (the Northern Corner) en route to Cape point. The beach is not only long, but is wide, giving way to wetlands, flora and fauna.

Stop At: Cape Point Ostrich Farm, M65, Main Road, Cape Point Cape Point, Cape Town Central 7985 South Africa
We drive past the villages of Misty Cliffs and Scarborough and absorb the breathtaking views of the Atlantic ocean. The Cape Point Ostrich Farm lies on the most beautiful part of the Cape Peninsula. The farm is 50km from Cape Town, next to the Cape of Good Hope Nature Reserve (Cape Point National Park). The drive to the farm is one of the great scenic routes of South Africa leading to the Cape of Good Hope. We stop for a fun visit to the ostrich farm to feed the ostriches.
Duration: 30 minutes

Stop At: Cape Point Nature Reserve, Cape Town Central South Africa
Named the Cape of Storms by Bartolomeu Dias in 1488; the Point was treated with respect by sailors for centuries. By day, it was a navigational landmark and by night, and in fog, it was a menace beset by violent storms and dangerous rocks that over the centuries littered shipwrecks around the coastline.
In 1859 the first lighthouse was completed; it still stands at 238 metres above sea-level on the highest section of the peak and is now used as the centralised monitoring point for all the lighthouses on the coast of South Africa. Access to this historical building is by an exhilarating three-minute ride in the wheelchair-accessible Flying Dutchman funicular that transfers visitors from the lower station at 127 metres above sea-level, to the upper station.

Cape Point is in the Cape of Good Hope nature reserve within Table Mountain National Park, which forms part of the Cape Floral Region, a World Heritage Site. It includes the majestic Table Mountain chain, which stretches from Signal Hill to Cape Point, and the coastlines of the Cape Peninsula. This narrow stretch of land, dotted with beautiful valleys, bays and beaches, contains a mix of extraordinarily diverse and unique fauna and flora.
Duration: 1 hour 30 minutes

Stop At: Simon's Town, Simon's Town, Western Cape
We stop for luch in Simonstown where you have the choice of many restaurants known for serving fresh fish. Enjoy the fruits of the ocean right next to the marina.
Duration: 1 hour 30 minutes

Stop At: Boulders Beach Penguin Colony, Simon's Town 7995 South Africa
The beautiful Boulders Beach is one of Cape Towns most visited beaches and the only place in the world where you get close to African Penguins.In 1982 a couple of these little crowd-pleasers settled on the soft white sand between the large granite boulders that protect the beach from wind and large, stormy waves, and currently the population is estimated between 2,000 and 3,000 birds. Sadly the African Penguin has been classified as an endangered species, due to things like over-fishing, habitat destruction, pollution, and irresponsible tourism activities, and the Boulders Beach colony has also felt the effect, with numbers dwindling over the last couple of years.