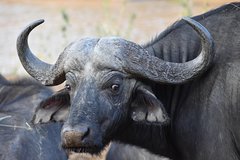 This is an comprehensive and detailed tour of Kwa Zulu Natal offering both culture, Isandlwana & Rorkes' drift battlefields where Zulus and British fought on 22 January 1879, and close encounter with wildlife such as the BIG 5. We have brilliant tour guides who are knowledgeable in both culture, history and South African wildlife. Lunch, dinner and breakfast included in the package.

Stop At: Isandlwana Battlefield, Isandlwana South Africa
After pick up from your hotel we embark on 3,5 hour journey to Isandlwana where the Zulu regiments fought against the British army on 22 January 1879. This was the first major encounter in the between the British Empire and the Zulu Kingdom - a decisive victory for the Zulus.

After the tour of Isandlwana lunch will be served, thereafter a short tour of Rorke's drift will take place, a battle which followed Isandlwana on the same day - a decisive victory for the British

After both tours have been conducted we will check in at a 4 star hotel for the evening where dinner will also be served
Duration: 20 hours

Stop At: Valley of the Zulu Kings, South Africa
The Spirit of the Emakhosini is a monument to the Zulu people. It comprises, on a grand scale, a bronze Zulu beer- pot, surrounded by the horns/tusks of seven animals associated with the Zulu. The pot stands on a beaded plinth accompanied by bronze reliefs of scenes of traditional Zulu life. The beer-pot is an item found in every household and is symbolic both as a receptacle of the heritage of the valley, and of spirit of togetherness. The horns symbolize the seven Zulu kings who are buried in the valley.

This cradle of the Zulu nation holds the graves of the Kings Zulu, Phunga, Mageba, Ndaba, Jama, Senzangakhona and DinuZulu.

Stop At: KwaZulu Cultural Museum, Ulundi, South Africa
The KwaZulu Cultural Museum at Ondini, near Ulundi, was opened in 1984 and houses one of the most representative collections of the rich cultural heritage of KwaZulu Natal. It focuses on the Nguni speaking peoples of South-Eastern Africa, from the earliest inhabitants to the great Zulu Nation. Of note is its famous collection of beadwork.

The items featured on the site is a selection of some of the beautiful items which can be viewed at the museum. The items are divided into categories by the use for which they were intended. There are also a number of items which belonged to King Cetshwayo who ruled the Zulu nation during the Anglo-Zulu war of 1879.
Duration: 1 hour


Day 2: Spend a night at a lodge in Hluhluwe-Imfolozi Game Park - 3 star