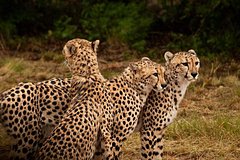 The De Wildt Cheetah Sanctuary is an hour drive from Johannesburg.  It's offers you the opportunity to learn more about fascinating creatures such as the wild dog, cheetah and various species of owls and vultures. The De Wildt Cheetah sanctuary is an excellent place to get up close to Cheetah and Wild Dogs, but also has a number of other really interesting animals to see including Honey Badgers, Wild Cats and Caracals. The centre specialises in breeding some of these rare mammals and in promoting awareness of the importance of conservation.

The De Wildt Cheetah Centre was established in 1971 with the aim of breeding endangered species. Over the past two decades the Centres efforts have resulted in the major achievement of breeding what was once a threatened species, the cheetah. Over the years, nearly 600 cheetah cubs have been born at De Wildt  a dramatic contrast to the days when the cheetah population of South Africa was estimated at a mere 700.

While the cheetah project was the base from which the Ann van Dyk Cheetah Centre launched its conservation ethic, it soon widened to include other rare and endangered animal species such as wild dog, brown hyaena, serval cat, suni antelope, blue and red duiker, bontebok, riverine rabbit and vultures  including the very rare Egyptian vulture.

Many of these have been successfully bred for later reintroduction into the wild, thus helping to re-populate areas where such species have disappeared or are no longer abundant.