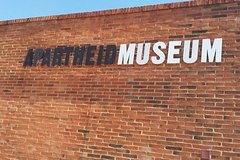 The Apartheid Museum is a museum complex in Johannesburg, South Africa dedicated to illustrating apartheid and the 20th century history of South Africa.

The Apartheid Museum opened in 2001 and is acknowledge as the pre-eminent museum in the world dealing with the apartheid story. Housed in an architectural inspiring building, the museum is the first of its kind to illustrate the rise and fall of apartheid and is an essential part of the cultural history of South Africa.

Starting at the ticket window where visitors are randomly assigned races and told to enter through separate turnstiles: one for whites, the other for non-whites, the museum gives an experience of South Africa under apartheid. Once inside, comprehensive - and often shocking - multimedia exhibitions explore the social and political forces that gave rise to apartheid, its core features and the exhilarating, hard-won achievement of democracy.