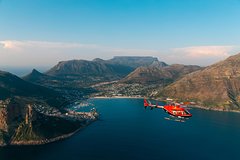 Cape Town is home to various stretches of natural beauty, hidden nooks of wonder and epic landmarks, all of which bring a unique flavor to our world-renowned city  and the glistening Atlantic Seaboard is one such region. Often referred to as Cape Towns Riviera, it encompasses the area starting at the V&A Waterfront and travelling all along the Cape Peninsula to Hout Bay. In this helicopter tour of Cape Town, follow Victoria Road as it takes you along the picturesque coastline, the sparkling Atlantic Ocean on the one side, with the changing mountainous slopes for which Cape Town has become so famous on the other. If cycling, driving or walking this stretch is sure to take your breath away, just imagine what it will be like to witness this splendor from the sky?

At our offices, you will receive your tickets and watch the safety video. Each passenger will have to be weight before departure and once you are ready, we will escort you into one of our luxury helicopters that will fly you along the designated route.

One of the world's New Seven Natural Wonders, Table Mountains flat top is an iconic silhouette and a beloved symbol of Cape Town

During the Atlantico Tour, you will fly over the City Bowl and Green Point Stadium.

The Atlantico Tour includes a flight past the majestic Twelve Apostles.

Fly over the rustic beauty of Llandudno

As many seals as you could ever wish for

You will be flying over our beautiful sandy beaches at Clifton and Camps Bay.