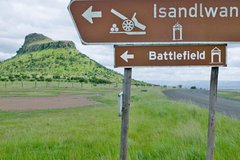 On this Battlefield we focus on the Isandlwana Battlefield and Rorkes drift Battlefield. These are the two major wars between Zulus and British People . In our Battlefield Tour we include a guide who will be introducing the battles , the victory between the 2 countries. Our Guides introduce these battles and lay out the foundation for details which will be given by the Battlefield specialist in the real sites where everything happened.

These battlefield has a museum which guest will have to visit for clarification of points. Guest are then taken to the real sites starting with Isandlwana Battlefield followed by Rorkes Drift Battlefield. It is a combination of sorrows and victories for both battlefield.

The Battlefield include the study, the research , the moment of truth for those people who has watched the film Zulu.

Our lunch will be at Rorkes Drift site and then we driveback to Durban.on our way back the guest keep engaging with guest to clarify everything.

Guests will have to give us their contact details including thexcellent name of their hotel and their contact numbers. We can communicate on our emails both the emails on our website are working.