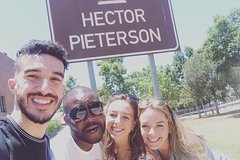 South Western Township, the birth place of South
African democracy and struggle , South Africas
most famous township and developed township.
Home to two Nobel Peace prize winners, largest
township in the country. Soweto is the melting pot
of South African urban culture with a constant
evolving fashion, food, lifestyle and entertainment.
This is a Township filled with Historic landmarks.
This is the place where apartheid history is still
revolutionised.

This is the second house Mandela spent most of the time living in it while he was in Johannesburg, with hes family and Ex wife Winnie Mandela

South African culture at its best, mingled up with modern urbanization, trendsetting what South Africa is best known for, its diverse cultures and way of life, a total fascination to the outside world and those abroad.

Regina Mundi is the largest Roman Catholic Church in South Africa.
And the first church to Be in South Africans history books during apartheid, when it opened its doors to anti-apartheid groups and provided shelter to activists.

Here we take a walk on the only street in the world with 2 noble price winners. A whole array of tourist arts & crafts to shopping for