Bo-Kaap Beauty and the Beat 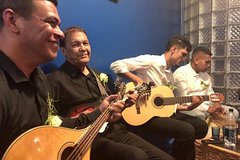 Bo-Kaap Beauty and the Beat

You will obtain a perspective from a resident of the area. It infuses History, Culture, Heritage and Traditional Music. No other tour offers this.

We start the tour at 71 Wale Street where we discuss the origins of the oldest suburb in South Africa. Our walk then takes us past the Auwal Mosque, which is the oldest mosque in South Africa, dating back to 1794, when it was started by slaves in defiance of Dutch law.

From here, we walk down the street with all the colourful houses. This is the most-photographed street in South Africa. We then work our way towards Cape Towns famed spice shop, Atlas, where you will smell the heady aromas of spices used in everyday Cape Malay cooking. These are the same spices used by slaves as an expression of freedom in their masters kitchens.

The tour then ends with a 30 minute traditional Ghoema music session, which is unique to this culture. The music is rooted in slavery. Slaves were not allowed to speak up against the authorities, but expressed it in the form of singing. We will savour a local snack and cup of tea at a hosts home as well.
Four types of songs are sung. The session is quite interactive as a brief explanation of each song is provided to the guests and who knows, you may be able to sing along as well :-).