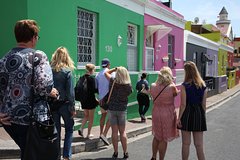 Our tour promises to take you on a completely unique journey into the rich history and living culture of the people of Bo-Kaap, plus you'll get to meet "My Hood" and check out some Bo-Kaap family life. I promise an insight into some never-before-seen parts of Bo-Kaap and its people.

Discover the home of the second Turkish Ottoman emissary to the Cape which still stands today as one of the oldest of the settler Jan de Waal's slave houses and the only one still kept in its original form.

Discover the history of the land, the Madrassa (Muslim School) and then later, Bo-Kaap's first official Mosque.

A 30min tea break with traditional Cape Malay biscuits and bakes in a Madrassa's and pre-primary run by Bo-Kaap's oldest and most active community organization, Boorhaanol Islam Movement.

We walk by Bo-Kaap Community centre where I'll explain the annual community activities that take place there before pausing at Bo-Kaap's official Civic Association. Elevated at the top of Wale Street, its a great photo opportunity.

We visit the burial shrine of Tuan Guru, Bo-Kaap's founding Sheikh and most famous teacher whilst getting a great orientation of Bo-Kaap and its proximity to the City.

We visit inside one of Bo-Kaap's oldest Mosque's to get a glimpse into the active role these Mosques play in our lives.

Visit my Mom, the Mosque is joined to a communal garden with some interesting history. We regroup and depart from here.