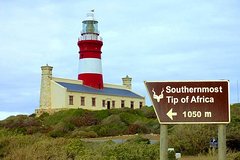 Cape Agulhas if you are visiting South Africa, should be on your list of the things to do.This is where the Atlantic Ocean and Indian Ocean meet, and from the lighthouse, you get a picturesque view of the the two Oceans.To complement the marker for the meeting of the Indian and Atlantic Oceans the park service has installed a huge topographical map of the African continent. It is amazing to walk around it and recognize the mountain ranges, river basins and other geographic features. Puts many things in perspective seeing it all laid out in front of you! In addition new walkways have been installed to add to visitors enjoyment of this beautiful area. If they are lots of people you will have to stand in line to get a picture at the marker. This place is by far one of the most beautiful places in the World.

At Cape Algulhas you will see geographic southern tip of the African continent and the beginning of the dividing line between the Atlantic and Indian Oceans according to the International Hydrographic Organization.Historically, the cape has been known to sailors as a major hazard on the traditional clipper route