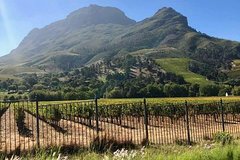 South Africa and a beautiful country where you will meet a country that has 11 official languages and especially Cape Town where you have rides for all tastes and culture in very stylish and deferential and with a very kind people to welcome you Brazilians ..

Script: Departure from your hotel at 09:00 hs. Drive continues towards the park of butterflies and amphibians on the way and the city of Stellenbosch (known as the "Dutch" city) The 2nd oldest city of the country with its typical architecture of Sec. 18 and 19, meticulously resting is a time travel during the European Colonial regime in the African Continent. With huge oak trees to its streets, its cobblestone cafés, art galleries, and surrounded by mountains, and a fertile soil, with a moderate Mediterranean climate, and with its welcoming people make the city of Stellenbosch one of the most charming cities in Africa, the city has the largest number of historical monuments of the Country, with its historical farms of traditional wines, Generations by generations of famous families, where a visit to the wineries, would be unmissable as well as the tasting of fine local wines. In the afternoon we head towards the city of Franschoeck colonized by French Huguenots fleeing from Europe during religious persecution, find their refuge here in South Africa, for here they were well received were excellent craftsmen and could exercise their Protestant religion, a charming city known as the "corner of France in Africa." With a cuisine of envy even to many French cities, the city's restaurants are among the best in the country, a variety of cafes along the main street of the city, with several museums, art galleries, workshops of local artists, surrounded by beautiful and luxurious farms producing famous wines and fantastic sparkling wines. by private tour, the tour ends at around 17:30 hs back to the hotel.