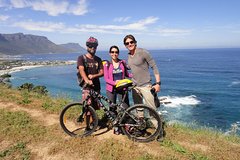 Cycle in the footsteps of Charles Darwin and find out about his discoveries along the Atlantic Seaboard. Discover the stunning seaside neighbourhoods of Sea Point, Bantry Bay, Clifton and Camps Bay.  And take in mountains surrounding Cape Town: Lions Head, The Twelve Apostle, and Table Mountain.

This fun-filled excursion is the ideal way to experience the beauty of the Cape Peninsula and Atlantic Seaboard, riding beside the deep blue sea and beneath the mighty Table Mountain with unsurpassed vistas from your bike. We leave from the Radisson Blu Hotel at the Waterfront. From there we take the beachfront promenade to Sea Point, a haven for Capetonians walking and jogging alongside the sea. After reaching Bantry Bay, climb uphill for a short while, taking in the fresh Atlantic breeze. We then make our way past Clifton and the four attractive beaches below where the beautiful people of Cape Town come to play.

Our journey continues along the western side of the Cape peninsula, past Maiden's Cove Beach where we take in the magnificent views of the Twelve Apostles Mountain Range and Camps Bay Beach. Ease downhill into Camps Bay before turning back along Kloof Road, sheltered beneath Lion's Head and Signal Hill.

We continue to the Mouille Point Lighthouse, the oldest working lighthouse in the country and through the new Green Point Urban Park to the famous Cape Town Stadium. We return via the iconic Victoria & Alfred Waterfront with its many curio shops and restaurants. Back at the Radisson Blu, indulge in gourmet canapés and beverage of your choice with the deep blue water of the Atlantic as your backdrop.

And what about Darwin? On his voyage aboard the HMS Beagle, he stopped here longer than in any other port on his voyage, except the Galapagos Islands. Darwin described Cape Town as a great inn, on the great highway to the east in a letter to his sister Catherine during his visit and recorded sightings of animals like elephant, rhinoceros, giraffe, hippopotamus and even the now extinct quagga, all within the boundaries of the Cape!

Note: This tour can be done as a morning/afternoon excursion and includes all bicycles, equipment, guides and canapés and sparkling wine (or non-alcoholic beverage of your choice).