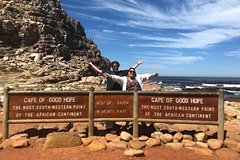 What makes our tours different is keeping away from the crowds while exploring the Cape at our own pace with no rush, with a flexible itinerary thats tailored to the individuals needs.

The day starts off with a drive through Cifton and Camps Bay beaches,

Enjoy a boat ride to seal island, and interact with the locals.

We will then take a scenic drive along spectacular Chapman's Peak with a stop at a lookout point along the Atlantic seaboard.

Enjoy a short hike off the beaten track, discovering various fauna and flora.

A visit to Boulder's beach where you will get to see the elusive African penguins. Thereafter passing through a naval town called Simons Town, with a feel of British colonial architecture dating back to the early 1800s.

Continuing through coastal towns such as Fishhoek and quirky Kalk Bay heading towards the colourful houses at Muizenberg, learn to surf capital!