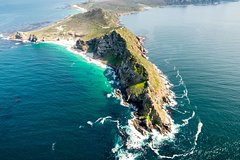 This 48-minute helicopter tour from Cape Town highlights the dramatic natural scenery of the Cape Peninsula and its two famous capes  Cape of Good Hope and Cape Point. Fly over Table Mountain National Park and along the shores of False Bay, taking in the beautiful beaches and the rugged coast line as you reach the capes. Then soar over Boulder's Beach and the surfers paradise of Muizenberg before heading back to the city over the beautiful vineyards of Constantia.

Start your Cape Town private helicopter tour at the V&A Waterfront, where youll board your chopper and take a deep breath as you soar into the blue skies. Pass over the Atlantic beaches of the Cape Peninsula and admire the rugged mountain range known as the Twelve Apostles as it captures the warm rays of sunlight reflecting off the oceans icy waters.

Continue around the prominent peak of Karbonkelberg, and then look down as the landscape changes from wide sandy beaches to gentle rock formations and hidden bay as it narrows down to the Cape Point Nature Reserve, with its untouched floral habitat and undulating hills. Almost unexpectedly your eyes meet the dramatic cliffs of the legendary Cape of Good Hope and Cape Point, which together form the very tip of the Cape Peninsula.

Enjoy a birds-eye view of the Cape Point Lighthouse and watch the waves batter the imposing structure, which clings to the cliffs. Then, head back up the peninsula, reaching the calmer waters of Simon's Town, with its historic naval base. Keep an eye out for the penguin colony of Boulders Beach, and fly over the beachside suburbs of Fish Hoek and Muizenberg, taking in the awe-inspiring seascapes of False Bay.

Return to Cape Town along the opposite side of the mountains, via the luscious vineyards of Constantia and the southern suburbs. Youll conclude your journey back at the heliport at the V&A Waterfront.