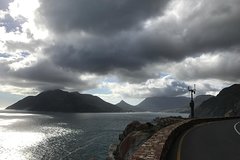 The Cape Peninsula tour is a must-do tour in Cape Town come to do. Quaint neighborhoods and iconic sights such as penguin colony of Boulder's Beach and Chapman's Peak Drive are experiences that all visitors want to see.

The Peninsula tour is probably the most popular tour to do when visiting Cape Town. The route has spectacular views of the ocean all around and pass through some iconic sights.

Suburbs such as Muizenberg, Scarborough, Kommetjie, Noordhoek and Kalk Bay will be visited. The latter has recently been named: "The coolest neighborhood in the world" by Forbes!

Along the way we will visit the penguin colony of Boulder's Beach, Cape Point Ostrich Farm and cycling along the popular Chapman's Peak Drive.

The tour ends in Campsbay