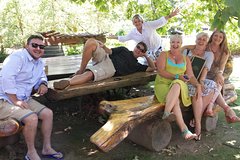 A personalized, relaxing,informative day out with beautiful scenery,history,wildlife and Wine ! A day to remember

This 7500 hectare reserve is filled with nature and animals that are free roaming such as South Africa's largest antelope the Eland,Ostrich,Bontebok,Cape Mountain Zebra and the infamous Baboon's ! .

One of the worlds most beautiful, spectacular coastal drives. Built in 1920's the route starts at the picturesque fishing harbour of Hout Bay and the climb winds steeply up to Chapman's Point, revealing breathtaking views of the sandy bays down below, the 9km route has 114 twists and turns and reveals the beautiful Long Beach (8km ) at it's lower end where you will often see horses galloping along the shoreline.The Toll road ends in the picturesque town of Noordhoek

The Oldest vineyard in South Africa established in 1685 by the Governor of the Cape, Simon Van Der Stel. A Beautiful Manor House takes you back in time to experience life in the Cape in its early years .

Here we will do a wine tasting experience which includes South Africa's famous Grape Varietal Pinotage propagated by the cross pollination of Pinot Noir and Hermitage grape varietals in 1925.