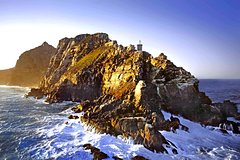 Cape Visits offers tours of the Cape Peninsula by road.

We'll take you to the famous Cape Point, where 'the two great oceans meet. The cold Atlantic Ocean and the warm Indian Ocean currents meet here, allowing for lots of sea and bird life. You can enjoy a meal or tea at the Two Oceans Restaurant, with its fabulous views across False Bay looking towards Hangklip, Gordons Bay, Strand, Mitchells Plain and Muizenberg.

Chapmans Peak drive offers visitors a stunning view of Long Beach near Noordehoek which forms part of the Atlantic Oceans, as well as Hout Bay