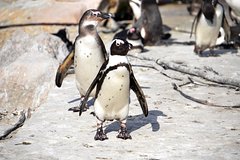 Explore the amazing beauty of Cape Town and take in all the beauty she has to offer on this Private Tour - from the pristine white beaches, the penguin colony, breathtaking mountains, to the spectacular sight of Cape Point.

Stop at Maidens Cove for photos

Continue to Cape Point and the Cape of Good Hope

Continue along False Bay, on your way back to the own

En route drive through Muizenberg  where the locals fetch water from the mountain
*There are souvenir shops and markets at Hout Bay, Cape Point and Boulders Beach.

Visit the historically rich Bo-Kaap, situated at the foot of Signal Hill & known for its narrow cobbled streets lined with colorful houses.
Stop for 10 to 15 mn to take pictures & enjoy a brief walking tour

Stop for pictures at Maiden's Cove a gorgeous ocean-side spot that lies between Clifton and Glen beaches. With picture perfect views of Lion's Head,Table Mountain this place will definitely hold a special place n your vacation memories

Drive along the beautiful Atlantic Sea Board , past the world-famous Clifton and Camps Bay beaches

Drive along the rocky coastline through one of the most awe inspiring & scenic roads in the Cape, Chapman's Peak drive. Stop and take a picture with a gorgeous background along some truly magnificent views of the sandy bays below

See some of the most dramatic coastline views & a chance to see various animal & plant species includng mountain zebra, eland, baboons and ostriches. Take a walk or ride a funicular (at own expense) to the top of the lighthouse at Cape Point. Visit & stop to take a picture at the most South Western Point of Africa, known as the Cape of Good Hope.