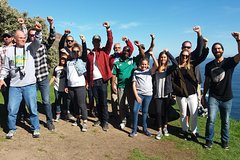 Encounter nature, history and sightseeing spectacles such as the Cape Point lighthouse, Cape of Good Hope - the south-western tip of Africa, scenic route; wildlife such as penguins, zebras and baboons. You might even spot whales on this scheduled/ shared tour!

Explore the biggest art and craft market in Cape Town. Experience Chapman's Peak - one of the most scenic drives in the world. See old shipwrecks and hike up to Cape Point Lighthouse.

Discover The Cape Point Nature Reserve that has rich biodiversity and is home to eight World Heritage Site accolades from UNESCO. Breathe the air at Cape Point which is among the purest in the world.

Explore Simon's Town - one of the oldest settlements in South Africa which has historical buildings that are classified as National Heritage and is also home to the South African Navy.

Taste wine in Constantia and then drive by a prison where Nelson Mandela was once incarcerated and a hospital where the first human heart transplant took place.

Sightseeing, Nature and Historic Attraction.
The name Signal Hill was given because the hill was chosen to be a place for sending out signals. The hill began to be used for such purposes after 1652 by Dutch Settlers. They would fire a canon to signal to their soldiers at the bay that enemy troops were approaching or some dignitary was on the way.

A Sightseeing and Nature Attraction.
Clifton Beach is located on Cape Towns Atlantic seaboard and is actually a series of four beaches separated by large granite boulders!
Clifton's 4th Beach is a blue flag beach and one of South Africa's most popular and sought-after beaches. It is visited by stars and the famous and its water are always ice-cold.

A Nature and Sightseeing Attraction.
Lion's Head is a mountain situated between Table Mountain and Signal Hill whose outline resembles the head of a lion. Lion's Head peaks at 669 metres above sea level. The peak forms part of a dramatic backdrop to the city of Cape Town and is part of the Table Mountain National Park.

A Sightseeing, Nature and Historic Attraction.
Camps Bay was named after Sir. Fredrick Von Campz who married the daughter of the farm/ land that contains Camps Bay Beach.

Camps Bay beach has a blue flag status. It has a stunning setting, pristine white sands and dazzling blue waters. Camps Bay Beach is really wide, backed by a row of palm trees, a busy road and a bank of fashionable restaurants and coffee shops that overlook the beach.

Camps Bay is a favourite wedding destination, and many romantic couples have given each other their vows on Camps Bay beach. It is also a campground of suntanners and sundowners.

Camps Bay is also referred as the place of the rich and famous that visit it. It has some of the most expensive residential properties in South Africa.

A Nature and Sightseeing Attraction.
The Twelve Apostles mountain peaks are located just a little south of Cape Town and are a fantastic design of nature. Get on this tour and see if you can count the twelve apostles (peaks) or a different number!

A Nature and Sightseeing Attraction.
Llandudno is a large sandy beach famous for surfing and sunset viewing. It is home to properties owned by famous celebrities contains the only nude beach in Cape Town.

A Historical, Nature and Sightseeing Attraction.
Hout Bay is a delightful fishing village with plenty of restaurants, upmarket shopping centres, endless tourist attractions and fun activities for the whole family.

The seal island in Hout Bay draws one of the largest nature and loving tourists to it - only Cape Point Nature Reserve beats it. At Seal Island you will see seals crowded on the island with literary no empty space to even see the plain ground. On you way back to the harbour you will also meet some 'domesticated' seals at Hout bay harbour whom you can take really closeup photos -even hugging them!

Hout Bay has the largest fishing industry in Cape Town and also the biggest art and craft market place in Cape Town where they play live music, offer different cuisines from all over the world, wine and beer.

Hout Bay is Dutch/Afrikaans means Timber Bay. Timber that was used to build ships was from Hout Bay. Also timber used to build the oldest standing colonial building - Castle of Good Hope (which was constructed between 1667 and 1672) was obtained from Hout Bay.

Please note this is an optional activity that has its own entrance fees - usually R80 a person depending on season.

A Nature, Historical and Sightseeing Attraction.
This is a stunning 9km route that has 114 curves that meanders the rocky coastline of Chapmans Peak  a 593 m high southerly extension of Constantia Berg/mountain. On the drive you will be able to get stunning 180° views of scenic surroundings. There are many places along the route where you can sit down for an African picnic experience.

Chapman's peak drive was constructed between 1915 and 1922 despite Cape Town only having two cars at that time! It also the place where the most popular car accident happened in South Africa when a Mercedes Benz plunged 100m down but the driver came out unscathed.

After Chapman's peak drive you will head into Chapman' Bay also known as Long Beach that is very beautiful. If fortunate, you might be able to spot whales on this stretch.

Please Note this activity is optional.
At the Ostrich Farm you will see ostriches in real life and also get to purchase original ostrich leather products and other crafts that are well appreciated world wide.

A Nature, Historical and Sightseeing Attraction.
Cape of Good Hope is the most historical point of contact to the Cape since the arrival of the Dutch in 1652. It was initially named Cape Of Storms because of numerous shipwrecks that are dotted around the coast.

Cape of Good Hope has breathtaking landscapes such as mountains, fynbos and beautiful white sand and unspoiled beaches such as Diaz beach which was named after the world famous explorer Bartholomew Diaz.

At Cape of Good Hope you may also encounter wildlife such as
the notorious Chacma baboons that steal from or even attack tourists for their bags looking for food; zebras, tortoise and wildebeestes in their natural habitat. There is also lot of bird life to behold.

A Nature, Historical and Sightseeing Attraction.
Visit the famous lighthouses at Cape Point that is have a majestic aerial view and are surrounded by world famous nature.
It is the first lighthouse built by Dutch settlers at the Cape of Good Hope.

The Cape Peninsulas rich and diverse plant life has earned it eight World Heritage Site accolades from UNESCO. The Cape Floral Region makes up only 0.5% of Africa, and yet it is home to more than 20% of the continents plants. In fact, there are more floral species in the Table Mountain National Park region than all of the United Kingdom. Youll find many of these while at Cape Point  recent estimates suggest that there are over 1000 species of plants in the Cape Point region, of which at least 14 are endemic.

The air at Cape Point is among the purest in the world, and thus it is home to one of Global Research Watchs (GAW) atmospheric research stations. GAW is a global network established by the World Meteorological Organisation to monitor trends and changes in the Earths atmosphere.

A Nature, Historical and Sightseeing Attraction.
This is a sandy cove with world famous resident penguins that can be viewed to within touching distance.

Boulder's Beach is located in Simon's Town which is one of the oldest settlements in South Africa. Simon's Town has a rich of what transpired after the arrival Dutch, has a lot of museums and is also headquarters of the South African Navy.

Simon's Town has scenic landscapes and historical architecture which has now been classified as National Heritage. Shark Diving is also done in Simon's Town as well as seasonal land based whale watching.

Get to do some wine tasting.This is an optional activity.
Constantia is the oldest wine producing region in South Africa. The region has gorgeous wine farms that range from historic elegance to modern marvels offering famous wine and chocolate pairings.

Drive by through one of the world's most dangerous maximum security prisons. Nelson Mandela, the father of post apartheid South Africa was once incarcerated there.

This a historic place where the first human heart transplant was performed on the 12th of December, 1967 by Dr. Christiaan Barnard.

University of Cape Town (UCT) is currently rated as the best university in Africa by the all the five major world university rankings.