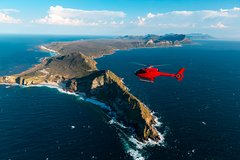 The Cape Point tour is a smorgasbord of visual feasting that offers the entire Cape Peninsula. From the bustling V&A Waterfront, you will take off over the icy blue waters of the Atlantic.

On your left, Table Mountain and the Twelve Apostles mountain range will rise against the shoreline, with Clifton and Camps Bay below. Youll soar over Hout Bay, Noordhoek and Kommetjie, and around Cape Point.

Returning along False Bay, youll see historic Simons Town, Fish Hoek and Muizenberg, the fine wine estates of Constantia and the cosmopolitan patchworks of Cape Towns CBD, before landing back at the V&A Waterfront.

One of the world's New Seven Natural Wonders, Table Mountains flat top is an iconic silhouette and a beloved symbol of Cape Town

The impressive and stylish Cape Town Stadium, one of the hosts for several 2010 FIFA World Cup matches

Just beyond Cliftons Fourth Beach lies the glamorous yet laid-back suburb of Camps Bay. The palm tree-lined boulevards extend to white beaches and vivid waters opposite a bustling strip of world-class restaurants, cafès and clubs looking out over the sea.

Towering above the Atlantic Ocean, the Twelve Apostles Mountain Range extends from Table Mountain, above Camps Bay to Llandudno. While its technically the back of Table Mountain, its also one of the most scenic stretches of coastline in the world.

Cape Point is the very tip of the Cape Peninsula and was dubbed the Cape of Storms by Bartolomeu Dias when he set foot there in 1488 and proved that there was a feasible route from Europe to India, around the storm-driven southern tip of Africa. The landscape features sheer, rocky cliffs jutting dramatically out of the stormy sea and is home to the Cape Point National Park and its rich biome of fauna and flora.

The charming seaside village of Simons Town lies on the False Bay coastline. Home to the South African Navy and a statue of the famed sea dog Just Nuisance, the town is steeped in nautical history and its streets are lined with centuries-old historical monuments

The rolling hills of Constantia are home to many of the worlds finest wineries, and boast some of the oldest wine routes in the Cape. Historic buildings and a patchwork of green vineyards make for spectacular aerial sightseeing over this leafy southern suburb.